Featured Quote:
I met with my friends at @LIFEDofLABORthis morning to discuss Long Island’s infrastructure needs. I’m proud to be a strong advocate for our healthcare heroes, offshore wind, affordable broadband, prevailing wages, and other critical labor priorities that LI’s future depends on.

The latest intraparty skirmish over President Biden’s agenda was set in motion shortly after the 2020 elections. As committee assignments for the next Congress were being doled out, Rep. Alexandria Ocasio-Cortez (D-NY) made a bid to join the House Energy and Commerce Committee, a key panel for health care and climate issues. Eliot Engel, a longtime Energy and Commerce member, had lost his primary to Jamaal Bowman, and his seat on that committee was going to be filled by another New Yorker.

But although AOC had the blessing of Rep. Jerry Nadler, the dean of the New York delegation, she lost out to Rep. Kathleen Rice, a centrist who represents parts of Long Island. This was a power move by establishment Democrats on the Steering Committee, which hands out committee assignments, and was seen at the time as punishment for AOC’s willingness to help with left-wing primaries of sitting members.

Flash forward to this week, where Rice joined with two other centrists to temporarily block an enormously popular drug pricing reform measure from advancing through the Energy and Commerce Committee. The Democratic-Republican split on the committee is 32-26. The objections of Reps. Rice, Scott Peters (D-CA), and Kurt Schrader (D-OR) to the drug price reform deadlock the vote. If AOC were on the committee instead of Rice, that measure would have passed.

First elected to Congress in 2014, Kathleen has become a leading voice on national security issues as a member of the Homeland Security Committee, where she passed legislation to improve airport security screening in her first year and conducted rigorous oversight of the Trump Administration’s border policies during her tenure as Chair of the Subcommittee on Border Security, Facilitation, and Operations. As a member of the Veterans’ Affairs Committee, Kathleen established herself as a fierce advocate for veterans and for accountability at the Department of Veterans Affairs, and she authored bipartisan legislation to expand employment opportunities for veterans, which was signed into law in January 2021. For the 117th Congress, Kathleen was named to the Committee on Energy and Commerce, which has the broadest jurisdiction of any authorizing committee in Congress, and she remains a member of the Homeland Security Committee.

Prior to Congress, Kathleen ran for District Attorney of Nassau County in 2005 and shocked the Long Island political establishment by defeating a 31-year incumbent, becoming the first woman elected District Attorney in Long Island history. Kathleen served as District Attorney from 2006 to 2014, and received national acclaim for her efforts to combat drunk driving, which led to a statewide overhaul of DWI laws and Long Island’s first DWI-related murder convictions. Rice also focused on combating public corruption, launching investigations that led to significant government reforms and the convictions of dozens of officials from both parties who violated the public’s trust.

Rice began her career in public service as an Assistant District Attorney in Brooklyn, NY, where she prosecuted cases of domestic violence and gang activity before joining the office’s elite Homicide Bureau. In 1999, Kathleen was appointed an Assistant U.S. Attorney, where she went on to an award-winning career as a federal prosecutor in the U.S. Department of Justice’s Philadelphia office.

Kathleen resides in Garden City, NY, where she was raised with her nine brothers and sisters, and she is the proud owner of a Maltese-Yorkie rescue named Pearl. Kathleen is a graduate of the Catholic University of America (1987) and earned her law degree from Touro Law Center (1991).

Kathleen Maura Rice (born February 15, 1965) is an American lawyer and politician serving as the United States representative for New York’s 4th congressional district. She is a member of the Democratic Party. Before serving in Congress, Rice served as the Nassau County district attorney, and, before that, she served as a federal prosecutor in the U.S. Attorney’s Office in Philadelphia and as an assistant district attorney in the Kings County District Attorney’s Office in New York City.

Rice was born in Manhattan, New York, to Laurence and Christine Rice. She grew up in Garden City, on Long Island, as one of 10 siblings. Rice graduated from Garden City High School. She received a B.A. degree from the Catholic University in 1987 and a J.D. degree from the Touro Law Center in 1991.[4]

In 1992 Rice began her career as an assistant district attorney in the Kings County District Attorney’s Office, under District Attorney Charles J. Hynes. She prosecuted cases involving burglaries, robberies and sexual assaults and was the first member of her class to be promoted to the homicide bureau.[5] 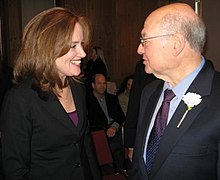 Rice with Gary Ackerman in 2010

Rice was elected Nassau County District Attorney in 2005, winning by 7,500 votes to become the first woman to hold the position.[7] She defeated 30-year incumbent Denis E. Dillon, who had generally won reelection easily, even after switching his affiliation from Democratic to Republican in 1989. Rice was the first serious opponent Dillon had faced since his first run in 1974.[8] Rice was reelected in 2009 and 2013.

In 2006, Rice declared her first major policy initiative to be an “assault on the drunk driving epidemic”. She lowered the blood-alcohol level at which plea bargains were offered,[9] supported Leandra’s Law, and charged a man with murder after a 2005 accident that killed a limo driver and a child.[10]

In September 2011, Rice’s office arrested seven students after uncovering an SAT cheating ring on Long Island.[11] When this case led to the discovery of a wider-spread cheating scandal, Rice worked with the College Board, which administers the test, to update security standards to halt cheating in the future. This effort sparked other test administrators, like that which gives the ACT, to update their standards as well.[12]

In 2007, Rice’s office, Nassau County and Hempstead police led a counter-assault on Terrace Avenue, a major drug haven and crime-ridden street in Long Island‘s Hempstead Village. Through a combination of zero-tolerance enforcement for repeat and violent offenders, and social-service based jail diversion for nonviolent and first time offenders, crime was reduced in the area.[17]

In 2008, following the trampling death of a Walmart employee at one of its Black Friday sales events, Rice encouraged Walmart to upgrade its security protocols at its nearly 100 New York stores.[18]

In 2012, Rice came out in favor of decriminalizing small amounts of “plain view” marijuana.[19] She has also supported efforts to allow some citizens to seal prior low-level, non-violent convictions in the hopes of improving their chances of obtaining employment.[20]

In the same year, then-Governor Andrew Cuomo chose Rice to be a member of the Moreland Commission on Utility Storm Preparation and Response, a panel tasked with investigating the failures of the Long Island Power Authority (LIPA) after Hurricane Sandy. The panel recommended that LIPA be replaced by a private, investor-owned company and that the Public Service Commission, which has regulation authority, be given more power to penalize and fine poor-performing utility companies.

Rice supports the “Raise the Age NY” initiative to treat nonviolent teen offenders as juveniles in the criminal justice system.[21] 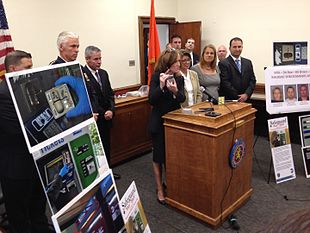 Rice implemented gun buyback programs in some of the county’s most crime-plagued areas, which removed more than 2,000 guns from the streets.[22] She also spoke out in favor of then-Governor Cuomo’s gun control legislation[23] and created the office’s first ever gun prosecution unit.[24]

In 2011 Rice announced a major prosecution of nine gun dealers and gun store employees police arrested in an undercover operation investigating alleged illegal assault weapons.[25] This was the second arrest for Martin Tretola, one of the gun shop owners. He was previously arrested on firearms-related violations in 2007. In 2012, a federal jury delivered a verdict rejecting Nassau County’s and Rice’s charges for the 2007 arrest and awarded Tretola $3 million in compensatory damages and $2 million in punitive damages.[26] This judgment was reduced to $1.3 million in total upon appeal.[27]

The Kings County district attorney’s prosecution of Antowine Butts for double homicide imploded and ended in an acquittal in 2000, but not before Butts spent two years in a Rikers Island jail cell. After the case unraveled, Butts alleged that he was a victim of prosecutorial misconduct in a civil rights lawsuit that was settled with New York City.

Rice was among those named in that suit, but has largely escaped attention for starting her career in an office in which prosecutors are alleged to have put some innocent people behind bars with coerced confessions, bogus witness statements, coached lineup identifications and other tactics.[28]

In April 2013, Rice announced the arrest of 18 members of the “Rollin’ 60’s” gang, an “ultra-violent” subset of the Crips. Rice charged these defendants with crimes ranging from attempted murder of a police officer to assault and robbery to gun and drug sales.[29]

Among those Rice has charged and convicted of corruption include a deputy police commissioner,[30] a Long Beach City Council member,[31] former Nassau County legislators,[32] and several town building department employees.[33]

In July 2013, Cuomo appointed Rice to be one of three co-chairs of the Moreland Commission on Public Corruption. The commission’s work is ongoing.[34]

Rice formed Nassau’s first-ever Medicaid and public assistance fraud unit, which has since secured millions of dollars in restitution for Nassau taxpayers.[35]

In 2010, Rice ordered the review[36] of a 1987 case in which Arnold Friedman and his son, Jesse,[37] pleaded guilty to sexually abusing young boys in their Great Neck, Long Island home. Rice formed a panel of outside experts—including the Innocence Project‘s Barry Scheck (who spoke out against the review)[38]—to examine whether Jesse Friedman had wrongfully confessed. In a 172-page report released in July 2013, investigators found that Friedman had not been wrongfully convicted.[39]

In July 2013, Rice was inducted as President of the District Attorneys Association of the State of New York (DAASNY).[40]

Rice with Israeli Prime Minister Benjamin Netanyahu in May 2015

In an August 2017 tweet, Rice referred to both the National Rifle Association and its spokeswoman, conservative political commentator and author Dana Loesch, as national security threats under President Donald Trump.[41] Loesch reacted to Rice’s tweet by calling for her resignation.[42]

Rice was one of three House Democrats on the Energy Committee to vote against a provision that would lower prescription drug prices.[44]

In 2005, Rice returned to Nassau County and declared her candidacy for District Attorney on the Democratic line. She challenged 30-year incumbent Denis E. Dillon. Throughout the campaign, Rice provided an alternative to Dillon, pledging to cut plea bargaining and touting her would-be zero tolerance policy for drunk driving. She also committed herself to modernizing the office’s approach to domestic violence and crimes of sexual abuse. Rice edged out Dillon, 51%–49%.[7]

Rice has never married and has no children.[58]

House Committee on Energy and Commerce