Featured Quote:
This footage is extremely disturbing. I call yet again on @PRPDnoticias
to refrain from the use of violence. They must respect the right of people to freely protest in Rincón. #PuertoRico

Featured Video:
Representative Nydia Velazquez: U.S. needs to be “on the right side of history” on Puerto Rico’s

i
News from Congresswoman Nydia Velázquez

The often-debated Gowanus Rezoning Plan had another setback on Wednesday when U.S. Rep. Nydia M. Velázquez (D-Brooklyn) and Assemblymember Jo Anne Simon (D-Brooklyn Heights-DUMBO-Cobble Hill-Carroll Gardens-Gowanus-Boerum Hill-Park Slope) held a press conference on the banks of the Gowanus Canal and called on the city to redo the environmental impact statement for the rezoning plan in the wake of Hurricane Ida.

The lawmakers, both of whom represent the neighborhood surrounding the canal, are urging the city to re-evaluate the study, which they argue does not adequately consider the consequences of climate change in Gowanus or combined sewer overflow into the canal.

“The Gowanus rezoning must not proceed until a new EIS is completed, one that includes direct involvement of the EPA and FEMA in the preparation of the study as involved agencies  — and one that actually uses relevant post-Sandy data,” said a statement from the Voice of Gowanus, a neighborhood organization that opposes the rezoning plan.

But her passion for politics soon took hold. In 1983, Velázquez was appointed Special Assistant to Congressman Edolphus Towns (D-Brooklyn). One year later, she became the first Latina appointed to serve on the New York City Council.

By 1986, Velázquez served as the Director of the Department of Puerto Rican Community Affairs in the United States. During that time, she initiated one of the most successful Latino empowerment programs in the nation’s history – “Atrevete” (Dare to Go for It!).

In 1992, after months of running a grassroots political campaign, Velázquez was elected to the House of Representatives to represent New York’s 7th District. Her district includes parts of Brooklyn, Queens and the Lower East Side of Manhattan. Encompassing many diverse neighborhoods, it is home to a large Latino population, Jewish communities, and parts of Chinatown.

As a fighter for equal rights of the underrepresented and a proponent of economic opportunity for the working class and poor, Congresswoman Velázquez combines sensibility and compassion, as she works to encourage economic development, protect community health and the environment, combat crime and worker abuses, and secure access to affordable housing, quality education and health care for all New York City families.

As the top Democrat on the House Small Business Committee, which oversees federal programs and contracts totaling $200 billion annually, Congresswoman Velázquez has been a vocal advocate of American small business and entrepreneurship. She has established numerous small business legislative priorities, encompassing the areas of tax, regulations, access to capital, federal contracting opportunities, trade, technology, health care and pension reform, among others. Congresswoman Velázquez was named as the inaugural “Woman of the Year” by Hispanic Business Magazine in recognition of her national influence in both the political and business sectors and for her longtime support of minority enterprise.

Congresswoman Velázquez can often be found close to home, working for the residents of her district.

Nydia Margarita Velázquez Serrano (born March 28, 1953) is a politician serving in the United States House of Representatives since 1993. A Democrat from New York, Velázquez chaired the Congressional Hispanic Caucus until January 3, 2011. Her district, in New York City, was numbered the 12th district from 1993 to 2013 and has been numbered the 7th district since 2013. Velázquez is the first Puerto Rican woman to serve in the United States Congress.[1]

Velázquez was born in the town of Limones in the municipality of Yabucoa, Puerto Rico on March 28, 1953.[2] She grew up in Yabucoa[3] in a small house on the Río Limones.[1][4] Her father, Benito Velázquez Rodríguez, was a poor worker in the sugarcane fields who became a self-taught political activist and the founder of a local political party.[1] Political conversations at the dinner table focused on workers’ rights. Her mother was Carmen Luisa Serrano Medina.[1] She was one of nine siblings.[1]

In 1984, Howard Golden (then the Brooklyn Borough President and chairman of the Brooklyn Democratic organization)[5] named Velázquez to fill a vacant seat on the New York City Council, making her the first Hispanic woman to serve on the council.[2][1] Velázquez ran for election to the council in 1986, but lost to a challenger.[1]

From May 1986 to July 1989, Velázquez was national director of the Puerto Rico Department of Labor and Human Resources’ Migration Division Office.[2] In 1989 the governor of Puerto Rico named her the director of the Department of Puerto Rican Community Affairs in the United States.[2][1] In this role, according to a 1992 New York Times profile, “Velazquez solidified her reputation that night as a street-smart and politically savvy woman who understood the value of solidarity and loyalty to other politicians, community leaders and organized labor.”[4]

Velázquez has been an advocate for human and civil rights of the Puerto Rican people. In the late 1990s and the 2000s, she was a leader in the Vieques movement, which sought to stop the United States military from using the inhabited island as a bomb testing ground. In May 2000, Velázquez was one of nearly 200 people arrested (including fellow Representative Luis Gutiérrez) for refusing to leave the natural habitat the US military wished to continue using as a bombing range.[7] Velázquez was ultimately successful: in May 2003, the Atlantic Fleet Weapons Training Facility on Vieques Island was closed, and in May 2004, the U.S. Navy’s last remaining base on Puerto Rico, the Roosevelt Roads Naval Station was closed.[8][9] 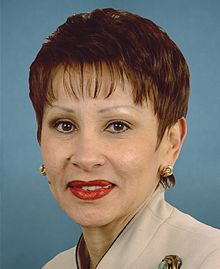 Velázquez ran for Congress in the 1992 election, seeking a seat in the New York’s newly drawn 12th congressional district, which was drawn as a majority-Hispanic district.[4] She won the Democratic primary, defeating nine-term incumbent Stephen J. Solarz and four Hispanic candidates.[3]

Velázquez’s 2010 campaign income was $759,359. She came out of this campaign about $7,736 in debt. Her top contributors included Goldman Sachs, the American Bankers Association, the National Roofing Contractors Association and the National Telephone Cooperative Association.[10]

Velázquez, who was redistricted into the 7th congressional district, defeated her challengers to win the Democratic nomination.[11] Her top contributors included Goldman Sachs, the American Bankers Association and the Independent Community Bankers of America.[12]

On September 29, 2008, Velázquez voted for the Emergency Economic Stabilization Act of 2008. On November 19, 2008, she was elected by her peers in the Congressional Hispanic Caucus (CHC) to lead the group in the 111th Congress.[2]

Before removing her name from consideration, she was considered a possible candidate to be appointed to the United States Senate by Governor David Paterson after Senator Hillary Clinton resigned to become Secretary of State.[13]

Velázquez was formerly a member of the Congressional Out of Iraq Caucus.[23]

Velázquez, also known as “la luchadora”,[24] married Brooklyn-based printer Paul Bader in 2000.[25] It was her second marriage.[25] In November 2002, New York City Comptroller Bill Thompson controversially hired Bader as an administrative manager in the Bureau of Law and Adjudications, joining Joyce Miller, wife of Representative Jerry Nadler, and Chirlane McCray, wife of City Councilman Bill de Blasio.[26] In 2010, Velázquez and Bader were in the process of divorce.[27]

In October 1992, during her first campaign for the House, an unknown person at Saint Clare’s Hospital in Manhattan anonymously faxed to the press Velázquez’s hospital records pertaining to a suicide attempt in 1991.[28] At a subsequent press conference, Velázquez acknowledged that she had attempted suicide that year while suffering from clinical depression.[28] She said that she underwent counseling and “emerged stronger and more committed to public service.”[28] She expressed outrage at the leak of personal health records and asked the Manhattan District Attorney and the state Attorney General to investigate.[28] Velázquez sued the hospital in 1994, alleging that the hospital had failed to protect her privacy.[29] The lawsuit was settled in 1997.[30][31]

Congresswoman Velázquez is the Chairwoman of the House Small Business Committee.

She is a member of the Congressional Hispanic Caucus.

The Congresswoman is also a senior member of the Financial Services Committee and serves on the following Subcommittees:

The Congresswoman is also a member of the House Committee on Natural Resources  and serves on the following Subcommittees:

Learn more about legislation sponsored and co-sponsored by Congresswoman Velazquez.